As part of their regular convocation, Royal George Chapter No 4119 celebrated Raymond (Fred) Higgins’ 50 years in the Royal Arch. 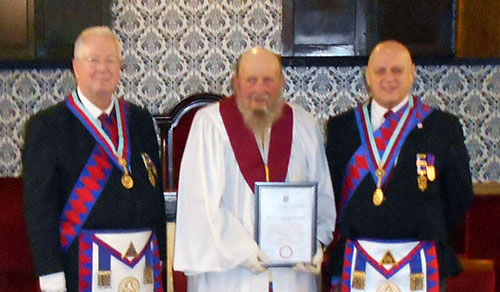 Pictured from left to right, are: John Murphy, Fred Higgins and Dave Atkinson.

After the opening of the chapter by the three principals, the next part of the evening was an explanation of the office of Scribe Nehemiah, the position that ‘Fred’ holds in the chapter. The explanation was given by David Boyes as part of the meeting and consisted of the history of the role and from the account, the companions learned that in present day Royal Arch chapters the officer who bears the title Scribe Nehemiah is a representative of a noble and inspiring character. It is an important seated position in the chapter and he is responsible for all admissions to our convocations.

The Garston Group Chairman John Murphy gave a short address which included that in 50 years in the chapter Fred, a stalwart and highly respected member of the chapter, had only missed three meetings and he filled an important position in the chapter which he thoroughly enjoyed. 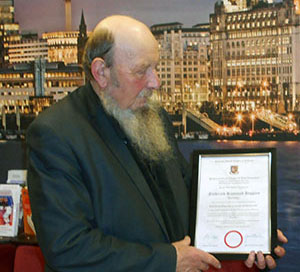 A proud Fred with his jubilee certificate.

John continued by explaining that the Grand Superintendent Tony Harrison was aware of the evening celebrations and had sent his congratulations on this auspicious occasion. John then requested the group vice chairman David Atkinson to read the celebration certificate and then John presented it to Fred.

The three principals closed the meeting in due form after everyone had congratulated the celebrant.

At the festive board, which consisted of a three-course meal, after the main toasts were completed, the group chairman made a short speech in which he congratulated Fred on his achievement.

All in all, it was a wonderful and dignified celebration.