Barry takes the chair once again

Popular Garston Group member Barry Tomlinson once again took the chair of King Solomon at the installation meeting of Lodge of Harmony No 220 held at Garson Masonic Hall; this being the second time that Barry has undertaken the duties of WM within Lodge of Harmony and the ninth such time in all. 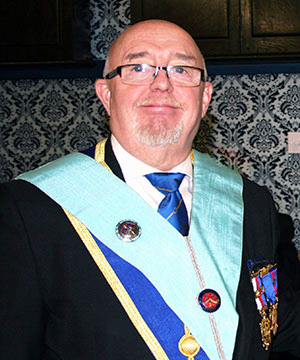 Installing WM Craig Robinson and his officers opened the lodge and conducted their routine business prior to welcoming principal guest of the evening Assistant Provincial Grand Master Derek Parkinson into the lodge. Derek was accompanied by fellow grand officers John Murphy (Chairman of Garston Group), Howard Griffiths and Phil Taylor. Craig took the opportunity of thanking all the officers and brethren of the lodge for their help, support and, above all, their friendship during his term of office.

After welcoming Derek and all the gathered guests, Craig was only too pleased to offer Derek the gavel of the lodge which Derek was equally pleased to return to Craig. Lodge director of ceremonies Mark Mellor who ensured the evening’s proceedings were conducted smoothly and efficiently then called for the appropriate salutations to be observed.

For the ceremony of installation, Craig called on the collaboration of Ken Bradley, Greg Barnes and Eric Lloyd to occupy the respective officers of senior warden, junior warden and inner guard. Craig, with the assistance of lodge member Geoff Bush conducted a thoroughly sincere and enjoyable ceremony of installation. This included Geoff presenting the working tools in all three degrees.

With Barry now installed, he proceeded to appoint the brethren into their respective offices for the ensuing year and it was particularly pleasing to see a number of ‘light blues’ taking office, including Alex Platt as junior warden, Neil Moir as junior deacon and Tony Ackroyd as inner guard. 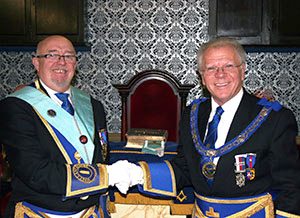 With the installation complete Derek was again on his feet, this time to offer the congratulations of the Provincial Grand Master Tony Harrison. Derek said that only that afternoon he had spoken with Tony who had instructed him to offer Barry his congratulations on once again taking the WM’s chair. Derek continued by adding that he had no doubt that had Tony been present, he would have also offered his congratulations to Craig and Geoff and indeed all those who had ensured Barry experienced such a memorable evening.

On behalf of the lodge Barry then presented Derek with a cheque for £673 in support of the Masonic Charitable Foundation 2021 Festival. On accepting the cheque and thanking the brethren, Derek was delighted to inform the lodge that they had achieved ‘Grand Patron’ status, having now supported the Festival to the magnificent sum of £4,500. 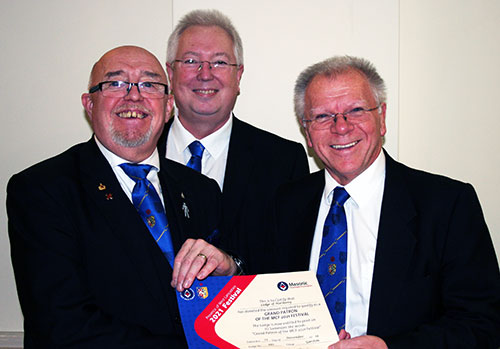 With the grand officers having retired and the remaining business of the lodge conducted, the brethren gathered in the main dining room to enjoy the festive board. Following dinner and in responding to the toast to the grand officers, Derek took the opportunity to add his own congratulations to the new WM and to those brethren whose efforts had contributed to a successful evening.

He continued by updating the gathering on the various activities and initiatives within Grand and Provincial Grand Lodge, including the estimate that brethren have devoted over 5,000,000 hours of work to non-Masonic causes over the past year! Derek also had the enjoyable duty of delivering into Barry’s care the lodge’s certificate of Grand Patronage of the MCF 2021 Festival.

In concluding the evening’s proceedings Barry entrusted Derek and John Murphy with gifts of flowers for the enjoyment of their wives, Joan and Jan. 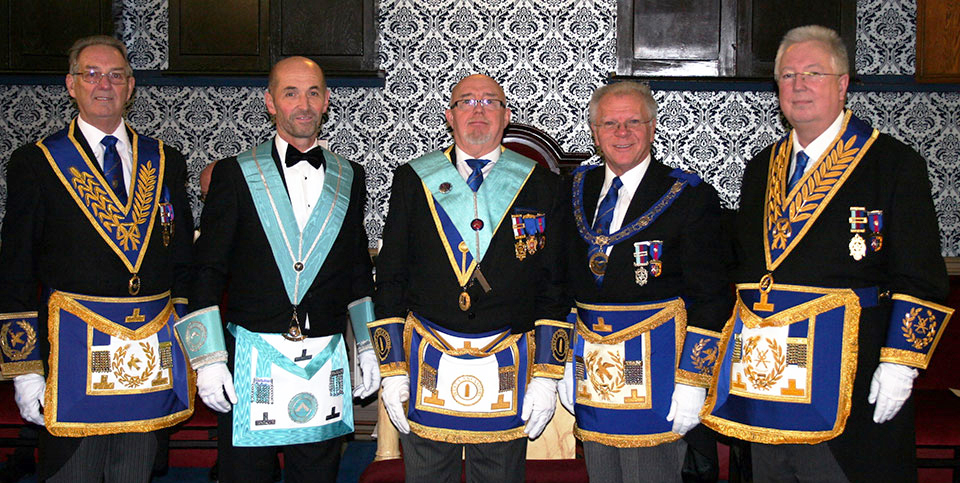