Fifth time in the chair for the evergreen Arthur

The members of South Liverpool Lodge No 2681 were delighted to have our Provincial Deputy Grand Master Phillip Gunning as principal guest at their installation meeting. The meeting which was held at Garston Masonic Hall was to install Arthur Newby as their new WM. 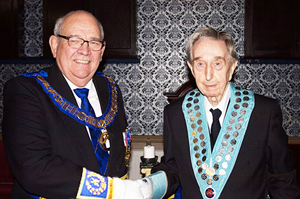 Arthur, who is a very spritely nonagenarian and in his 40th year as a Freemason is no stranger to the chair of King Solomon; this being the fifth such time he has occupied the office, albeit only the second time within South Liverpool Lodge, having previously occupied the chair in both Knotty Ash Lodge No 5741 and Queen’s Lodge.

In his working life Arthur was a quantity surveyor, beginning an articled pupil at 16 until his retirement at 79 in 2007 – perhaps enough for most men, but not Arthur, who is a published author and is awaiting the publication of his second book.

The lodge was opened by WM Ian Yoxall who conducted the routine business of the evening before requesting lodge members Bill Todhunter, Herbie Fennings and Will Spencer to assist him and undertake the respective duties of senior warden, junior warden and inner guard for the installation ceremony.

Provincial Deputy Grand Director of Ceremonies Ian Halsall then entered the lodge to announce that Phil was without and demanded admission. Phillip, accompanied by Assistant Provincial Grand Master Derek Parkinson, Garston Group Chairman John Murphy and other grand and Provincial grand officers were duly welcomed into the lodge and received the appropriate salutations. 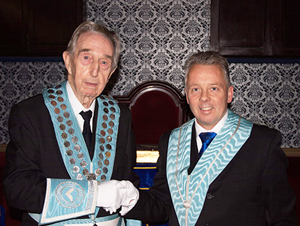 Arthur thanks Ian for a job well done.

Ian Yoxall called on Arthur’s long-time friends Peter Williams and Ron Stanton to present the master elect, Arthur. Ian, and for the second part of the proceedings, lodge DC Hughie O’Neil then conducted a delightful ceremony of installation. They were supported by Paul Armstrong, Bill Todhunter and Herbie Fennings who presented and explained the working tools in the appropriate degrees.

Arthur appointed the officers into their new positions with a warm word of thanks to each appointee. With the appointments completed, Ron delivered an impeccable address to the WM with an obvious heartfelt sincerity. The hard-working Hughie O’Neil delivered the address to the wardens with equal aplomb prior to Phillip addressing the brethren of the lodge in his customary peerless fashion.

At the conclusion of the ceremony Phillip again took to his feet, this time to offer Arthur the congratulations of the Provincial Grand Master Tony Harrison, adding that he had no doubt Tony would have congratulated installing master Ian for a job well done.

Thanking Phillip, Arthur then presented him with four cheques, each in the sum of £100, in support of The Air Ambulances, Blind Veterans UK, The West Lancashire Freemasons’ Charity and Garston Masonic Hall. Accepting the cheques, Phil, on behalf of those who would ultimately benefit from such generosity, thanked the brethren. 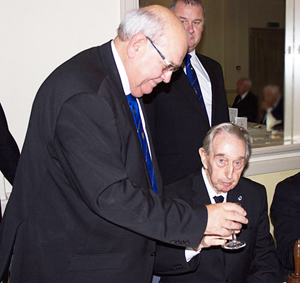 Phillip and Arthur enjoy a well-earned glass of wine.

With the remaining business of the evening concluded, the brethren gathered in the main dining room to enjoy a well merited dinner. Phil, in response to the toast to grand officers, took the opportunity to offer his own congratulations to all those who had taken part in the ceremony. This included the hard-working Provincial Deputy Grand Director of Ceremonies Ian Halsall and Provincial Assistant Grand Director of Ceremonies Ryan Modlin.

He continued by offering an update on the many works taking place within both Grand and Provincial Grand Lodge. These included the development of ‘Solomon’ and the contributions made by Stewart Granich as well as thanking Derek Parkinson for his work for the charities.

But perhaps the most pertinent point Phillip was to make involved the PSA initiative within Provincial Grand Chapter stressing his hope that brethren undertake the test to ensure an early diagnosis to this potential killer.

Concluding the evening’s celebrations, gifts of flowers were made to Phillip, Derek and John for the enjoyment of their respective ladies.