An evening of celebration and surprise at Allegiance

Earlier in the year Ken Dobie celebrated 50 years in Freemasonry, a major milestone and memorable event in anyone’s Masonic career. Add being installed into the chair of King Solomon within the same year, no doubt adds greatly to such memories, but when the current WM is your son and the installing master is your other son, then this makes for a truly unforgettable Masonic year for both Ken, his sons and the lodge. 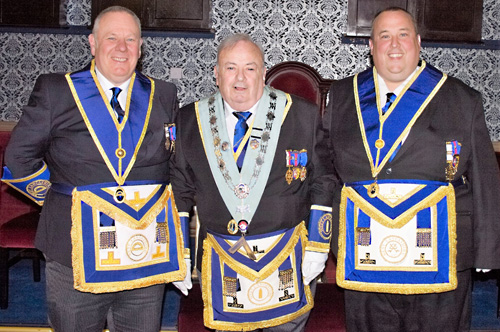 Pictured from left to right, are Andrew, Ken and Stewart Dobie.

Lodge of Allegiance No 7352 is relatively small lodge and a member of the Garston Group. At its installation meeting held at Garston Masonic Hall, the lodge was delighted to welcome as its principal guest, the Deputy Provincial Grand Master Philip (Phil) Gunning. Phil was accompanied by Assistant Provincial Grand Master Derek Parkinson and a number of other grand officers, including, on his first outing since his appointment to grand rank, Garston Group Chairman and lodge secretary John Murphy.

The WM Stewart Dobie, with the assistance of his officers, opened the lodge, before the lodge DC Dave Atkinson presented newly appointed grand officer John Murphy to the lodge. On behalf of all present, Stewart congratulated John and a warm round of applause was given to this very popular Garston Group Chairman.

The announcement of the presence of Phil Gunning was made by Provincial Deputy Grand Director of Ceremonies Ian Halsall, who went on to conduct the proceedings of the evening with a quiet and calm efficiency. Phil was duly welcomed into the lodge, as were all the grand and Provincial grand officers, before the various salutations were made.

For the ceremony of installation, Stewart called on his elder brother Andrew to install their father Ken into the chair, for what will be his fourth such honour. Andrew called for the presenting officers, with Stewart and Ken’s brother in-law Ted Weaver stepping forward to present the master elect. Andrew conducted the ceremony of installation with dignity, pride and obvious heartfelt joy in being able to place his father into the chair of King Solomon, a point Phil was to make particular mention of later in the evening’s festivities.

On appointing his officers for the ensuing year, Ken thanked each officer for accepting the office and said he looked forward to working together.

For the address to the new master, the lodge called on Ken Bradley, who gave a flawless rendition of this most important element of the evening’s event. This was followed by an equally memorable address to the brethren of the lodge by Phil.

At the conclusion of the installation ceremony, Phil was once again on his feet, this time to offer the congratulations of the Provincial Grand Master Tony Harrison. Phil said he had been instructed by Tony to offer his congratulations to Ken and the brethren of the lodge, together with his wish that they all enjoy a happy, successful and healthy year together. Phil continued by saying that had Tony been present, he had no doubt at all that he would have congratulated Andrew and indeed all those involved in producing such a wonderful event.

This was now Ken’s cue on behalf of the lodge to present Phil with donations to charity. In fact, three cheques were presented. The first, for the sum of £100, was in support of Garston Masonic Hall. The second cheque, for the sum of £200, was in support of the work of the Wirral Narrowboat Trust. This is a special award, made in memory of the late Danny Wilson, a much-missed member of the lodge, who dedicated himself to the work of the trust for many years. The third cheque for £1200, was in support of the MCF 2021 Festival. On receiving the donations and on behalf of those who would benefit, Phil expressed his thanks to the lodge, stating that for such a small lodge these were incredible sums of money.

Following the presentation of charitable donations, it is the usual custom to deal with any correspondence, so it was somewhat of a surprise when Provincial Grand Secretary Peter Taylor stood up and advised Phil that he had another duty to perform. Phil called for Jim Corcoran to be placed before him. Jim who was attending as a guest, is the Garston Group festival representative and is very well known for his Masonic and non-Masonic charitable work. Indeed, to such an extent, as to be honoured by Her Majesty earlier this year with the award of the British Empire Medal.  With a bewildered Jim now before him, Phil asked the Provincial Grand Secretary to read out the proclamation from the Provincial Grand Master, appointing Jim to the rank of Past Provincial Grand Superintendent of Works with immediate effect.

Phil Gunning and Ken Dobie enjoy a glass of wine.

With the remaining work of the evening concluded, the lodge was closed and the brethren gathered in the main dining room, where they enjoyed an equally pleasant festive board, at which Phil informed the gathering of the increasing numbers within the Craft, the initiatives within Royal Arch and the progress of our MCF 2021 Festival. Of the festival, Phil informed the brethren that a total of £2,600,000 had already been raised and he thanked all those who had help contribute to this achievement.

Proposing the toast to the newly appointed WM or “Dad”, Andrew took the opportunity to make reference not only to the work Ken undertakes as a Freemason but also, along with his wife Esther, that of a grandparent. As he pointed out, in today’s world the need for both parents to work is increasingly required and as such, the help, support and guidance provided by grandparents is both necessary and important.

In closing the evening’s celebrations and on behalf of the lodge, Ken presented Phil, Derek Parkinson and John Murphy with gifts of flowers for the enjoyment of their respective ladies.